Club News:
The new year started with our customary Handicap Tournament which pits all levels of player against each other. This has the intention of allowing players from the bottom of the ladder to play against the top guys on a more even basis. The top guys were given massive “minus” points starts which put them under huge pressure. 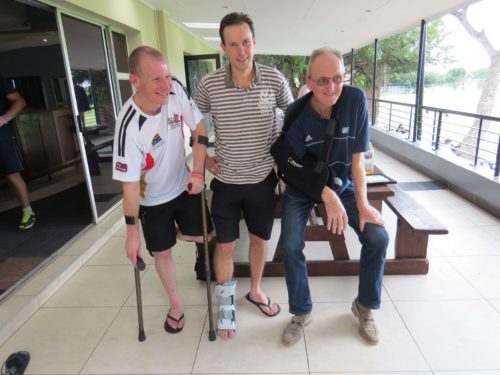 The Winner was Graham West, who had a ding-dong match against Chris Hughes, and third was Phil Louw

The Summer League is already in full swing which sets the “pecking order” for League participation.

League News:
The Gauteng and Masters Leagues will start soon and we have the same entry as last year with 6 teams in each league. If any of you wish to play for Wanderers this year, even as reserves, we welcome new entrants whether experienced or not. Just a note to say the Masters League is for players over 35yrs of age.

Tournament News:
We are excited to announce that a new Company has been formed, namely, Bullring Squash Events, to foster the game of Squash in this country. The two directors are Leon Gelderblom & Phil Louw. The inaugural tournament will be the biggest PSA tournament in S.Africa with the largest prize money ever. The tournament will be played at the Wanderers between the 2nd & 6th May this year. To enter, or to just see what’s going-on, look at .
More squash news next month…….watch this space.

Yours in Squash,
Dave Grant

Page load link
We use cookies on our website to give you the most relevant experience by remembering your preferences and repeat visits. By clicking “Accept All”, you consent to the use of ALL the cookies. However, you may visit "Cookie Settings" to provide a controlled consent.
Cookie SettingsAccept AllRead More
Manage consent

This website uses cookies to improve your experience while you navigate through the website. Out of these, the cookies that are categorized as necessary are stored on your browser as they are essential for the working of basic functionalities of the website. We also use third-party cookies that help us analyze and understand how you use this website. These cookies will be stored in your browser only with your consent. You also have the option to opt-out of these cookies. But opting out of some of these cookies may affect your browsing experience.
Necessary Always Enabled
Necessary cookies are absolutely essential for the website to function properly. These cookies ensure basic functionalities and security features of the website, anonymously.
Functional
Functional cookies help to perform certain functionalities like sharing the content of the website on social media platforms, collect feedbacks, and other third-party features.
Performance
Performance cookies are used to understand and analyze the key performance indexes of the website which helps in delivering a better user experience for the visitors.
Analytics
Analytical cookies are used to understand how visitors interact with the website. These cookies help provide information on metrics the number of visitors, bounce rate, traffic source, etc.
Advertisement
Advertisement cookies are used to provide visitors with relevant ads and marketing campaigns. These cookies track visitors across websites and collect information to provide customized ads.
Others
Other uncategorized cookies are those that are being analyzed and have not been classified into a category as yet.
SAVE & ACCEPT